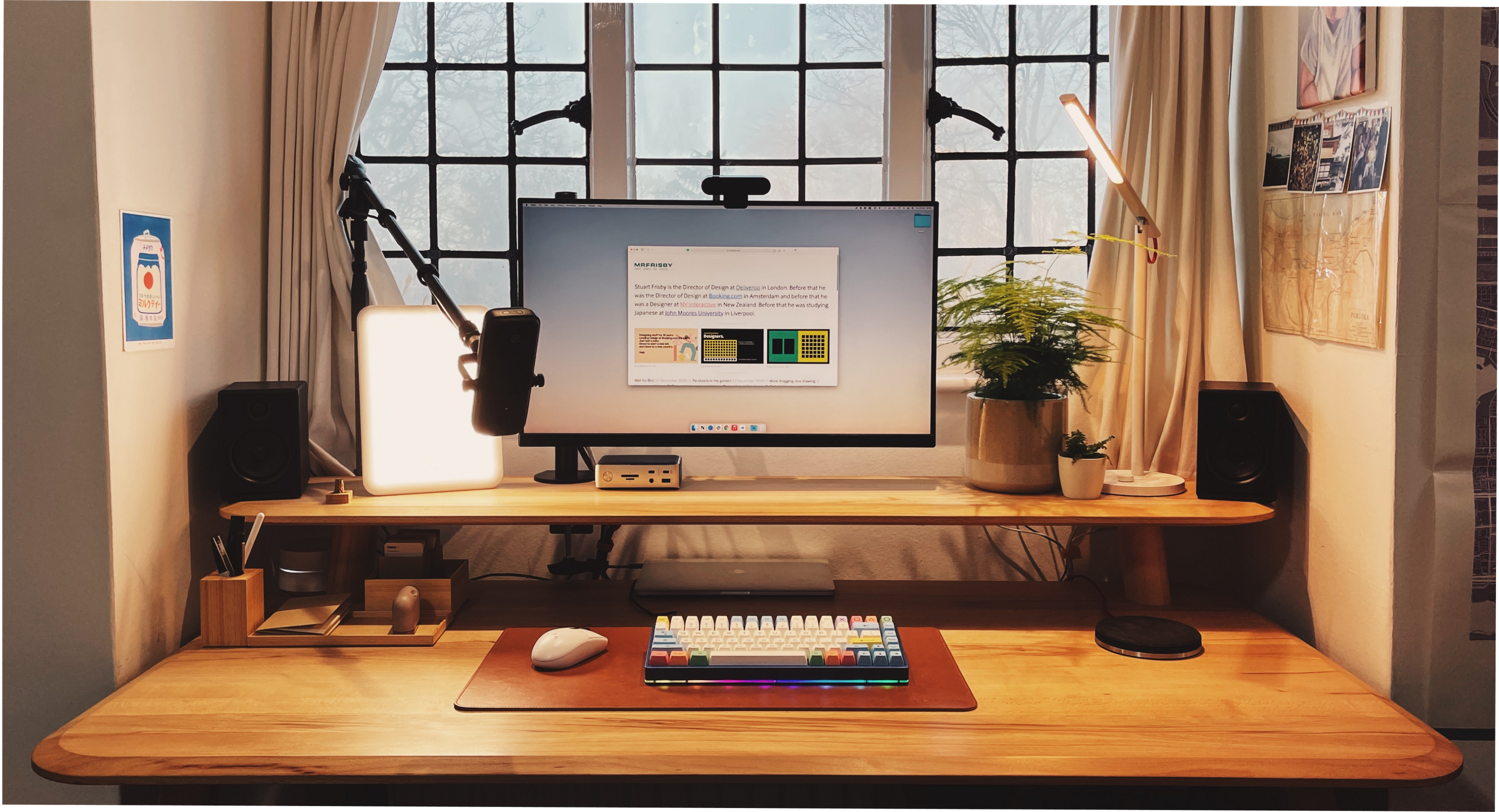 Like everyone else I know, I’ve spent most of this year working from home - and it’s been both a delight and a complete pain in the arse. Initially, I was working from the one room in the house we hadn’t started unpacking after our excellently timed February move from Amsterdam, but over the 10 months since, I’ve managed to create what most of the time feels like a calming and productive space to work from - a privilege I know is not available to everyone and for which I am hugely appreciative.

I wanted to just run through some of the stuff I’m using and how it’s panning out for me - this setup has been a continual evolution through the year, and it’s changed quite a lot as I’ve found improvements for stuff, or added new gear along the way. Here follows a few quick notes on some of the stuff in the image above.

Sav & Okse Olger Desk - Beech I got this desk from De Machine Kamer in Zaandam, and it was a much better fit in our giant Amsterdam house than it is here in our early 1900s English house, but it’s rock-solid being made from solid wood, and has some metal bracing built in to give it extra tensile strength. The shelf creates loads of extra space and opportunities for hiding away the cable mess and there’s plenty of room for adding my iPad/OP-1/etc. without having to shift stuff around. I do find myself wishing I had a sit-stand desk, and I have thought about sticking this tabletop on a sit-stand base, but for now, this is serving me just fine.

LG 27UK850-W At the centre of my setup is this now 3-year-old LG monitor. It’s fine, has pretty good IO, drives my MacBook Pro without issue, and doesn’t have any silly RGB or loud branding (except the LG logo which I blacked out with a marker). The worst thing about this display was the stupid curved stand it came on and which occupied a silly amount of desk space, so it’s now mounted on the cheapest single-arm vest mount I could find on Amazon.

KBDFANS KBD75V2 In an otherwise pretty calm, mostly beige setup, this is my one concession to fun. This keyboard came fully assembled from KBDFANS, and is excellent - the SA key profile suits my hunt-and-peck typing style perfectly, and the build quality is excellent.

Logitech G305 I spent ages looking for a decent wireless mouse that wasn’t designed for right-handed people, a parameter which rules out almost every ergonomic mouse available. This Logitech one is positioned as a gaming mouse by virtue of its super light-weight construction and it’s fast response times, but more importantly for me, it is almost symmetrical and so usable for a lefty. It has more features and buttons than I’ll even use, but my hand no longer hurts as it did with the Magic Mouse.

Lumie Vitamin L On the upper left side of the desk is my SAD lamp. This is the first year I’ve used one, and I can’t say if it works or not, anyone who knows me or follows me on Twitter will know that I hate Northern European winters and struggle with the perpetual (literal and metaphorical) darkness that comes with living in England, especially this year. It does however definitely help to have a bright diffuse light for video calls.

Elgato Wave:3 Microphone This is a recent addition after my old mic started making weird noises whenever it was in action for more than a few hours per day. The Elgato mic is great - the sound quality is excellent, the physical mute button and gain control is really useful. It did take me a while to work out that macOS by default had chosen the wrong sample rate for it which was causing some static, but having figured that out it’s working really well. It’s currently mounted on an old free-standing mic stand which is tucked behind the desk, I’ll need to get a proper mic arm at some point.

Sony WF-1000XM3 I’ve been pretty glowing about these earphones before, and I am still a big fan of them, so much so that when my previous pair went missing I immediately replaced them with another set. Unlike AirPods these don’t hurt my surprisingly small ears, they sound great and I seldom run out of charge. I’m fortunate that for the most part I am in this room alone, so I don’t use them at my desk all that much, but they’re great for the occasions when I do need them.

Anker PowerExpand Elite Having tried various inline USB-C hubs, I finally gave in and got a big boy version. Having moved from a wireless keyboard to wired one, and with the Logitech Mouse needing a USB port for a transmitter, I needed something with a few more ports, and which was going to be in permanent use rather than being fished out whenever I needed to plug something in. So far this thing has been solid - the MacBook charges off it and connects via it to the display, and there are enough ports around the back that the front remains clear for anything extra I need to connect. The inclusion of a Micro-SD card slot is super useful for dumping photos from my camera.

BRIO ULTRA HD PRO I always run my laptop in clamshell mode. I like using a single large screen, and never want to type on the laptop, so for me having it open is a worse way to work than just tucking it away and treating it like an expensive and poorly performing desktop. That does mean that I need an external webcam, and this one from Logitech seemed to be a good balance between something simple that offers a good quality image. I have been tempted at various points throughout the year to fish out an old DSLR and join the throng of people using those on video calls - but it feels like overkill, and frankly the lower the resolution my raggedy visage is broadcast in the better.

Xiaomi LED Desk Lamp The other light on my desk is this one from Xiaomi. It has adjustable brightness and colour temperate controls and lets off a surprising amount of light for something so small. It has some kind of smart home functionality via an app I’ve never downloaded.

Grovemade Charging Pad This charging pad was the least offensively designed one I could find, and I was super happy with it until getting the new giant-sized iPhone which is slightly too big for it to fit comfortably in the sweet spot. I’ve been eyeing up the Nomad changing pad as a replacement.

Audioengine A2+ Speakers There’s really no need to have speakers this loud when all you’re listening to is people mumbling on video calls, but when I can stick some music on these speakers are insanely good - I don’t understand how something so small makes so much noise and with such clarity. They’re very good, I recommend them to everyone who is looking for desk speakers.